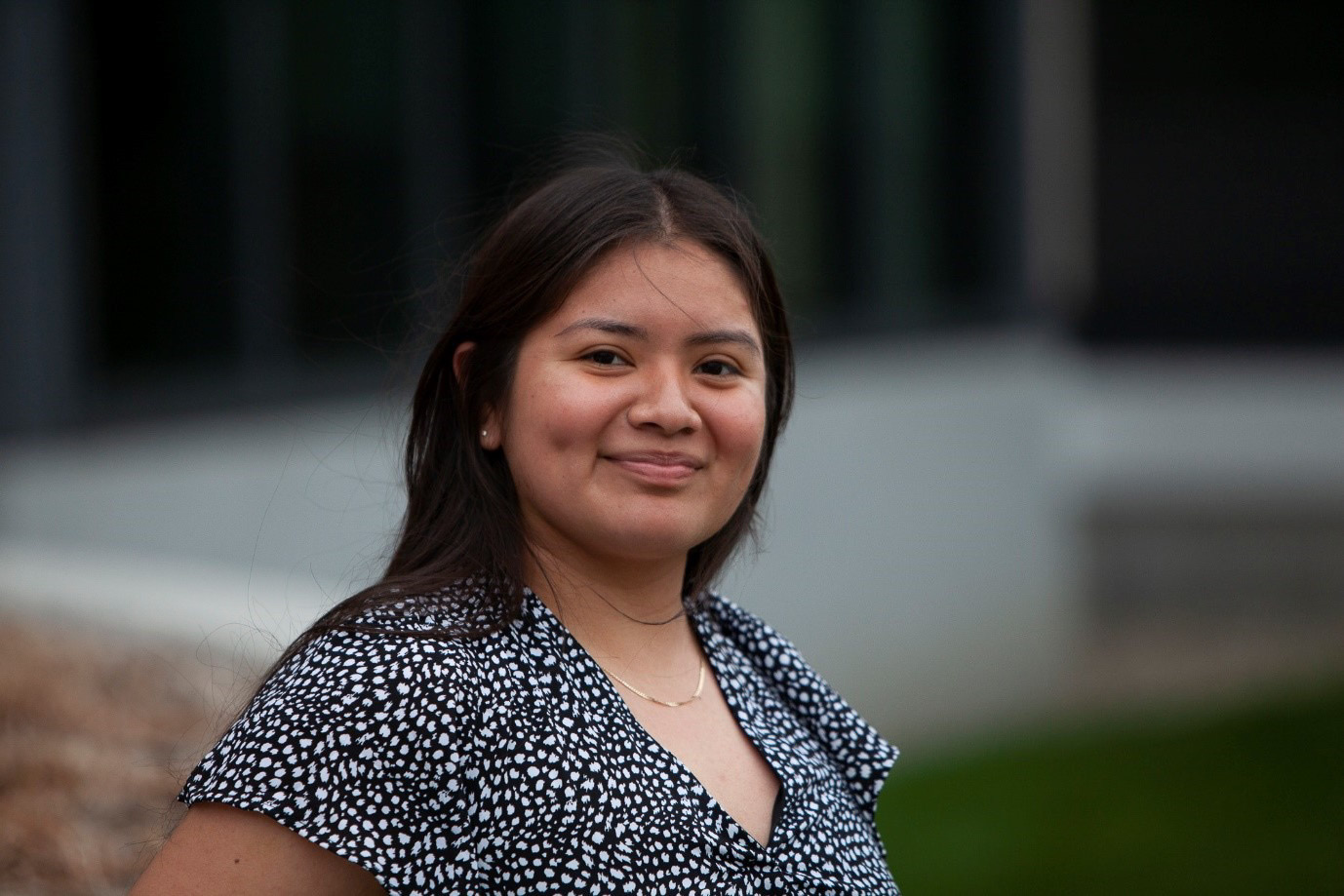 Rising sophomore Luz Vazquez Hernandez was back home in Mulberry, Florida when she learned that she had been selected to speak at the Office of Migrant Education (OME) 2022 Annual Director’s Meeting. She felt nervous and a little bit scared at the prospect, but excited too. She would be provided an all-expenses paid trip to Washington D.C. for the event and would join other students there on stage to share her story. When Luz fearlessly took to the podium on July 20, 2022, she was representing not only herself but also her fellow scholars within MSU’s College Assistance Migrant Program (CAMP).

Since childhood, Luz spent summers relocating with her family from Florida to Michigan so that her parents, migrant farmers for over 20 years, could pick crops. Although when she was very small she didn’t fully understand what motivated this yearly trek (she thought it was just a summer road trip), Luz was used to working hard alongside her family. From a young age she had been getting up early every day to help her mom make food and look after her younger siblings. At 14 she got her first job working with her parents and older brother picking blueberries, a difficult skill which she would hone for five more years but never quite feel at home with. This experience taught her that she wanted something more. In her remarks during the OMG Annual Director’s Meeting, Luz explained: “I really wanted to go to school. I really wanted to get a degree and help my parents out.”

When it came to choosing a college, Michigan State University was the standout option. Luz’s older brother was already a student there and Michigan, while far from home, was a familiar place for her and her family. MSU is also the home of CAMP, a U.S. Department of Education funded program that aids first year students who are migratory or seasonal farmworkers, or children of the same. This assistance can include funding students’ everyday needs, from academic items such as textbooks to personal items such as eyeglasses, as well as help with practical life skills such as creating a resume or signing up for insurance. CAMP also provides students with connection and a support system during what can be an isolating experience being far from home for the first time. “The CAMP program really tries to engage everyone,” said Luz. “I knew everyone there, as well, was coming to a whole new environment.” Luz had learned about CAMP in high school and had seen how it benefited her older brother, who was set to graduate at the end of his fourth year. She thought CAMP could benefit her too. Beyond financial needs, CAMP students are also supported in their academic journey by regular check-ins, mentoring, and tutoring opportunities.

It was through her connection with CAMP that Luz found herself standing at the podium in Washington D.C. telling her story. She had been with the program for a year, and in that time had impressed program runners with herdetermination and strength of character. They decided to nominate her for this prestigious opportunity to share her words in front of program directors from all over the country. After she was chosen, Luz said it wasn’t until she was physically in D.C. that she fully realized the scope of what she had undertaken. She got to experience some of the OME event after she arrived, and she was also given time to explore the city itself, which she remembers fondly, especially hearing so many different languages on the streets of the capital.

The next day she took to the stage. Her story is humble and powerful, noting the perseverance of her parents which laid the foundation for the work ethic she would come to apply in school and in life, touching on the struggles which inspired her to seek an alternate career path through higher education, describing how the COVID-19 pandemic changed the lives of her parents, like so many migrant workers, in ways which linger to this day. “I was like a voice to the same people, just like me,” Luz observed, going on to recall how her mother had told her: “You should be proud. You’re a voice to many of us. Many of your cousins, they have the same background as you, they’re trying to go to college.”

After the event, Luz expressed her gratitude. “I was really grateful for the opportunity…seeing the other speakers and meeting the other interns at D.C, I heard their stories and they, too, expressed how grateful they were because, of everyone else, we were chosen to speak in D.C.”

Majoring in Political Science with prelaw track, Luz works as a legal assistant in a private law firm and hopes to become a lawyer herself one day. As she continues down this path in her undergraduate career at MSU, in the short term she hopes to become a CAMP mentor. She has already been guiding students from back home who are thinking about college but feeling scared and uncertain. Says Luz, “I told them I felt the same way. I told them it’s going to be exciting and it’s going to be awesome being there.”