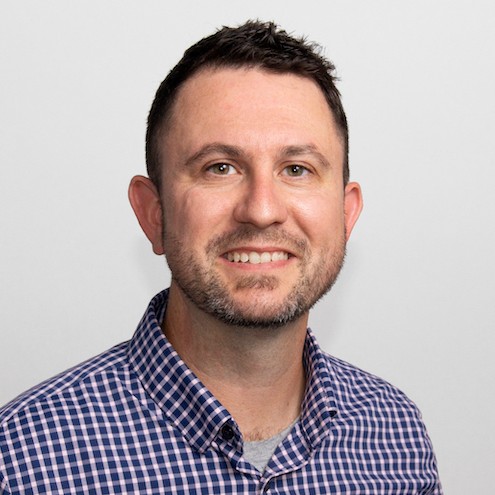 A new cross-campus project is tackling two problems at once — and showcasing the marquee traits that make all Spartans proud: resilience under pressure, a willingness to collaborate, and a relentless drive toward innovation.

A new cross-campus project is showcasing the marquee traits that make all Spartans proud: resilience under pressure, a willingness to collaborate, and a relentless drive toward innovation.

The initiative is tackling two serious problems at once — many MSU students found their on-campus jobs had ceased to exist as classes moved online; and MSU had to make online classes meet the same award-winning standard for accessibility for which it is known. Both of these problems emerged nearly overnight.

When Nate Evans began taking the measure of these problems, he wasn’t in an ideal strategic mindset. Rather, he was squeezing through throngs of the confused and angry in one of the nation’s busiest airports. Fresh out of a conference in California, the reality of an emerging pandemic began to set in as the airport loudspeaker buzzed incessantly about delayed flights. Society as we know it was slowing its gears. Against the murmur of the crowd and increasingly-unappealing smell of Cinnabon, Nate found a place to call his team, at MSU.

“It was daunting and surreal,” says Evans, who is the senior manager of MSU’s Digital Experience (DigitalX) Team. “It was incredibly difficult not to be geolocated with the rest of the team. On the personal side, I wondered if I would get a flight home. Working through that, I felt kind of helpless. It was a unique situation.”

Before Evans was lucky enough to get an early flight back home, his supervisor gave him another dose of our new reality. “My supervisor said, ‘I’m going to ask you to quarantine.’ It hadn’t even hit me, because we were in triage mode. By the time we got back, everyone was in quarantine or lockdown.”

Solving Two Problems at Once

As Evans and his team waded into the problems of interrupted student employment and making a bevy of newly-uploaded lectures accessible via closed captions, the full breadth of the task was intimidating. “We were getting thousands of minutes of video per day added to the system,” says Evans. “The challenge was to keep making that an equitable experience.”

That’s when MSU’s Chief Information Officer, Dr. Melissa Woo, pitched an idea. MSU would contract students, many of whom had lost their jobs when in-person operations on campus were suspended, to help with the university's closed captioning efforts. The captions are generated by a language recognition program, but usually require human corrections—that’s where the students would come in.

“Dr. Woo said that we have all these students that are going to be negatively impacted because they worked at Sparty’s, or in a service job, and they can’t do that now,” says Evans. “We also have all this video content being added online, and accessibility is a DEI issue. We have to meet that.”

A Collaboration at Unprecedented Scale

Moving classes online meant building courses in long work sprints, talking with individual faculty and coordinating with colleges, and—most importantly—ensuring students had what they needed to weather the crisis. The student closed captioning initiative was one small cog in that machine, but the DigitalX Team felt it was essential to get right, right away.

“What’s the saying? You eat an elephant one bite at a time,” says Evans. “It’s just chunking this project into smaller pieces. Then it’s trusting everybody is going to step up, and they did in real ways. I’m amazed at not only Digital X, but how the rest of our partners came together: the Hub for Innovation in Teaching and Technology, the College of Arts and Letters, the Eli Broad College of Business, the College of Natural Science, MSU IT, the MSU Libraries, the instructional design network, and countless others. Everybody just kept saying, ‘I’ll own that,’ in response to the work that was emerging. Everybody was raising their hands and saying ‘I’ve got that’ in ways I’ve never seen before, because we’ve never been forced into this position.”

Of particular note, says Evans, is the agile response from the Resource Center for Persons with Disabilities (RCPD). “They are typically very hands-on in person with the students they support. Essentially overnight, we were all working remotely, but they were still focused on supporting students that might be disadvantaged by a quick, overnight change.”

As he recounts the effort to transition online, Evans is at pains to include everyone who sacrificed sleep and comfort to collaborate on this initiative and make the transition a reality. Chief among those whose work is never done is Client Services within MSU IT—the people fielding and triaging the thousands of support calls that come in as students and faculty adapt

In regard to the closed captioning student employment initiative, Evans says one of the questions they are asked most often is about the cost of hiring students to do the corrections.

“People ask, ‘How is this more efficient than, say, a third party vendor, that uses globalization and crowdsourcing to do this as cheaply as possible?’ The short answer is that it’s not.

“This will be a more costly effort. But the goal is really for MSU to step up in a real way and meet the challenges of today, right now. This is an example of a bunch of people from across the university coming together to ask ‘What if we could do that?’ This has made me really proud to work for Michigan State.”