As part of our celebration of first-generation students and their experiences, the Office of the Provost presents a series of reflections from first generation faculty and staff.
Dr. James Lucas is the assistant dean of Global Education and Curriculum in the Office of the Associate Provost of Undergraduate Education. 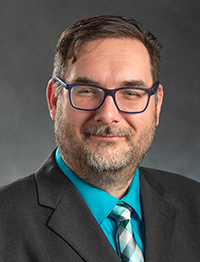 Did a parent or guardian help you go to college? What kind of people are/were they?

I was raised by a single mother who worked as a secretary in the local elementary school. She took the job so she could be home to watch me and my brother, especially summers. My father did go to college, but he was not in the picture very much nor did he really raise me in any way.

I would say that neither of them had a vocation or a strong connection to schooling. My dad actually trained to be a teacher because of his brother, but then when he met my mom, she got him a job at Chrysler. Before he worked at Chrysler, I think he worked as a mechanic and in a spa. He worked at Chrysler my whole life, but he was never happy, although strongly pushed me at times to follow in his footsteps and work in the auto industry.

When it came time to go to college, I did it all on my own. I actually had to forge my mom’s name on checks to pay for application fees. She didn’t see the point in paying to apply for college, and I also had to write any letters related to financial need and such that needed to come from parents. My dad’s only contribution to my college going effort was to tell me to major in business.

If you did it on your own, please tell us about how the idea came to you and how you pursued it.

It was probably the influence of my teachers that got me on the college track. When I signed up for classes in middle school, I had the option to do either “honors” or “regular” classes. My friends and I all signed up for “regular” classes. When I got my schedule for seventh grade in the mail, I saw that I was in all the honors classes and I freaked out. My friends had been put in them as well.

My mom called the school, and we found out that my 6th grade teacher had put us in the honors classes. It’s funny, because my mom listened to my teacher and kept me in those classes, but my friends’ parents removed them from the classes. I would say that being in those classes changed the trajectory of my life and I will forever be in debt to Ms. Kay Juhas for pushing me in that way. Once I found myself in the honors classes in middle school, those led to the college prep classes in high school, which puts the idea that you are going to go to college in your head.

What were your first moments or months on campus like? Are there any specific memories that stand out?

I struggled and felt like an imposter. My mom quite literally dropped me off and left.

My specific memory was going to my first class in James Madison, and there were two guys in that class that ended up in my honors natural science class right after. I approached them in the Wilson lecture hall and asked them if I could sit with them, and they asked me two questions: was I in the honors college, and what language did I take in high school? Well, I was not yet in the honors college, but eligible to take an honors class. I took French in high school, but they took Russian and Chinese…my high school didn’t offer anything like that. They seemed to deem me not worthy of sitting with them, and rebuffed my request. I never, ever have felt so isolated.

I think it was also hard because my roommate came from money, and he didn’t have to pay his own way. I was low-income on my mom’s salary and was totally depending on scholarships, aid, and my own funding for most of my school. My dad offered to help me pay for books, which only lasted one semester before he told me they were too expensive.

How did your parents/family/guardian prepare you for college? How did you prepare?

I had little to no support from my parents to go to college. I can’t really think of anything they did to help me per se. I even had my high school friend take me to and from orientation.

I did prepare with a friend from high school. She ordered “where there is a will, there is an A” video cassettes, and we watched those together. I put most of those tips into action my first year.

Why did you decide to go to college?

I wanted to get away from home, and it seemed like the next step for me after high school. Like I said, due to my teachers and my path in school, not so much my family. I think I also saw people around me who were not happy with their work, who were frustrated and worried about money a lot. I didn’t want to live like that. College seemed like a way out.

As a first-gen student, how was the application and admission process?

I worked in the high school counseling center as a job, so I had access to a lot of teachers, counselors, and administrators who could answer questions for me. The biggest issue I had was paying for application fees, as I said, and obtaining documents and information from my parents. My mother never wanted to sign off or write any letters for me. Also, doing financial aid documents stressed me out because I would have to fight my parents to get the information.

The rest was okay for me. I was a good student and fairly organized. I just listened, read, and followed the rules. I think that there were a lot fewer options when I was a student, so not as confusing. No Internet when I applied!

What challenges did you run into as a first-gen student?

Not feeling like I fit in at school and finding my place. I had to work a lot, and if I had not gotten the RA job my junior year, I would have had to drop out, as most of my scholarships were for one or two years. I also noticed a divide emerge between my mother and I as I pursued more education. She would accuse me of being arrogant or overeducated. She seemed intimidated by my degrees. Neither of my parents could have told you what I was studying, learning, or doing. Most of my family think I’m still in school because I work at MSU. They think I get the summers off.

I felt this again when I got my PhD and dissertation. I noted that my peers who had family that had gotten advanced degrees seemed to have more support and more understanding of how to navigate the dissertation. I found it interesting that even as a PhD student in his thirties, I was still feeling a bit out of place.

How long did it take you to get acclimated to university life?

When I got a job working for AOP (now New Student Orientation) and met a group of new friends, I felt more at ease. That took a semester. I don’t think I really felt comfortable until I became an RA my junior year. That was when I really felt like I met my people.

Were there any systems of support for first-gen students at your school?

I think that first-gen is a really broad term that includes a lot of issues. I would say there was support for me as a low-income student, but not for a first-gen student status.

I had great teachers, a decent school district, and strong internal motivation. I was my high school valedictorian, so for me being first-gen is really about a general feeling of isolation and lack of support. Then layer on a lack of finances. I think that other first-gen students might have not had adults looking out for them at all, or might not have had school resources to help them. Like I said earlier, there are a lot of ideas wrapped up into this.

Looking back, what’s one thing you wish you could tell your younger self at the beginning of your college career?

I wish I had not been so afraid or doubted myself so much. I think that the sense of not belonging or fitting in, and my fear of failing, held me back.

Do you have any advice for other first-gen students?

Don’t be afraid to take some risks.

***
Learn more about MSU's designation as a First-Gen Forward institution, network with other first-generation faculty and staff, and get swag from the First-Generation Student Success Project team here.