From Migrant Worker to FRIB Engineer: One Student’s Journey

A transformative decade changes a student's destiny and, unexpectedly, brings him closer to his father. 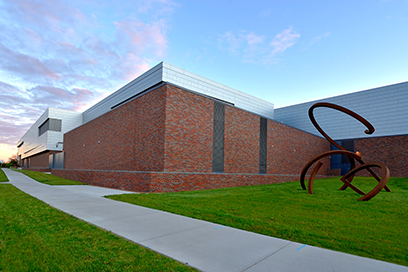 Like his father, Eleazar Gutierrez spent his workdays picking strawberries. And cucumbers. It’s the sort of work that leaves you with a pain in the lower back at the end of a ten- or twelve-hour shift. The work is the definition of hard and necessary; migrant farmers like the Gutierrez family are a fundamental part of the agricultural economy. But the work takes its toll on the body. And it can be hard to pursue other things, like an education, when most of the day is devoted to exhausting manual labor.

This is one reason Eleazar’s father can never stop bragging about his son. Eleven years ago, they were spending their days together in the field. Now, Eleazar is an electrical engineer at one of the most cutting-edge science facilities in the world: the Facility for Rare Isotope Beams (FRIB).

“My father almost brags too much,” says Eleazar with a laugh. “I’m like, ‘Dad, you don’t have to tell everybody. You just met them.’ But he’s a proud father. I get that. He was a strict disciplinarian, and in a way, I think this validates his perspective.”

Like so many seasonal agricultural workers, Eleazar dreamed of doing something else one day. Fortunately, MSU’s College Assistance Migrant Program Scholars Initiative (MSU CAMP) is just such an opportunity for people with Eleazar’s drive: an educational program that offers people with migrant or seasonal farm work backgrounds a unique chance to begin an undergraduate program at MSU.

“I was a first-generation college student,” says Eleazar. “I had nothing to base my experience on. It was very exciting, very scary, mixed in with hope, a sense of finally getting after it and trying to change my life. And all of that coupled with a ton of emotional and physical change. I don’t even know how to put it into words.”

A Truth About Student Success

Eleazar had always loved mechanical things and had a knack for them. He knew that if he was serious about being an engineer, he’d have to supplement his mechanical aptitude with math—a lot of difficult math. He was elated to be chasing his dream, but a dose of reality showed up in the form of a book labeled Calculus.

As someone who went on to grapple with plenty of high-level math concepts—multivariable calculus and differential equations come to mind—Eleazar says the comparatively easy Calculus I was his greatest math challenge.

“Everything just gets so abstract so quickly,” he says. “The idea of a ‘limit,’ I just couldn’t wrap my brain around it.”

There is a truth about student success buried here: that student struggles often come at key inflection points—such as entering the world of conceptual math—and may have little correlation with the overall difficulty of the material. This is why even partial differential equations came easier to Eleazar than Calculus I. It’s also why help at a crucial point in a student’s academic journey can change their entire future; one can imagine the alternate timeline where Eleazar became too frustrated with his foray into conceptual math to continue. Luckily, the combination of Eleazar’s uncommon will to succeed and help from the Math Learning Center (MLC) helped him over those early hurdles.

“To be honest, I’m slightly above average intelligence, I think,” says Eleazar. He says this as a counterpoint to the assumption that he must be naturally gifted at math. “I just needed a lot of help. I don’t consider myself to be a trailblazer in most areas I study. I like to grasp at least the fundamentals. Obviously, if I was going to be doing electrical engineering, math was going to be a big part of that.”

Eleazar’s experience at the MLC discovered another truth about learning difficult material, but only in retrospect: the process doesn’t always feel pleasant or useful in the moment, but pays dividends in time.

“With something that’s really hard, you don’t think you’re learning at the time, but looking back five or ten years later, you realize the concepts are so basic now.” he says. “At the time, I struggled so hard, but now I get them completely. That class was my first time dipping my toes into the realm of a really abstract topic.”

Eleazar went on to tutor at the Holden MLC branch, helping CAMP students in particular. “It was a lot of work, but it was good to give back to the program that had given me so much.”

Eleazar’s first job after MSU took him far away from home, to a semiconducting company working in Cedar Rapids, Iowa. “I always wanted to go into research or design. I’ve always been interested in RF, electromagnetics, analogue circuits. Hardware has always piqued my interest.”

Eleazar spent twenty-seven months in Iowa. The experience was a mixed bag.

“You have your first real taste of the real world. You adapt to it. Some things are going to let you down, and some things you don’t expect at all are much better. Businesses exist to make money, of course. But when you work for a business, a lot of times you stop doing science for the joy and the pushing of boundaries. You start recycling designs to get things to market.”

As much as he enjoyed aspects of his job, it became a grind. Eleazar once again felt the call to do something fresh.

Arrival at the FRIB

Eleazar landed a job at the FRIB as a Radio Frequency Engineer. He feels at home at troubleshooting the complicated, million-dollar equipment—largely because the FRIB’s purity of mission resonates with him.

“We do science for the sake of science,” he says. “There’s some stuff here we’re going to find that doesn’t have a direct commercial application. But the things we’re discovering still have value. That’s what’s really appealing to me. I wanted to get back to doing science for the love of it.”

To that end, Eleazar began his master’s degree last January. He’s determined to keep learning and honing his craft.

In a curious way, working at a world-class pure science facility has brought Eleazar closer to his father, who is still working on a rural farm. Their day-to-day duties have diverged, but Eleazar looks at where he is now and understands his father’s sometimes hard disciplinarian perspective. Taking the job at the FRIB has allowed Eleazar to spend time with his parents and reflect on his amazing journey into adulthood.

“As you get older, I think you begin to see things from your parents’ perspective,” says Eleazar. “They were right. Maybe I should get to know my parents as humans and not as figures of authority.”

Reflecting on his entire journey thus far, Eleazar says, “College is so much growth in such a short period of time. You eventually become the person you’re going to be. At the time you don’t realize it, but you look back on it fondly. I encourage everybody to do hard things. If they want to do it, they can do it. You may not get everything right away, but if you start now, you’re going to figure it out.”