Spartans Innovate to Stay One Step Ahead of COVID-19

When innovation, collaboration, and adaptability are called for, Spartans will rise to the occasion. 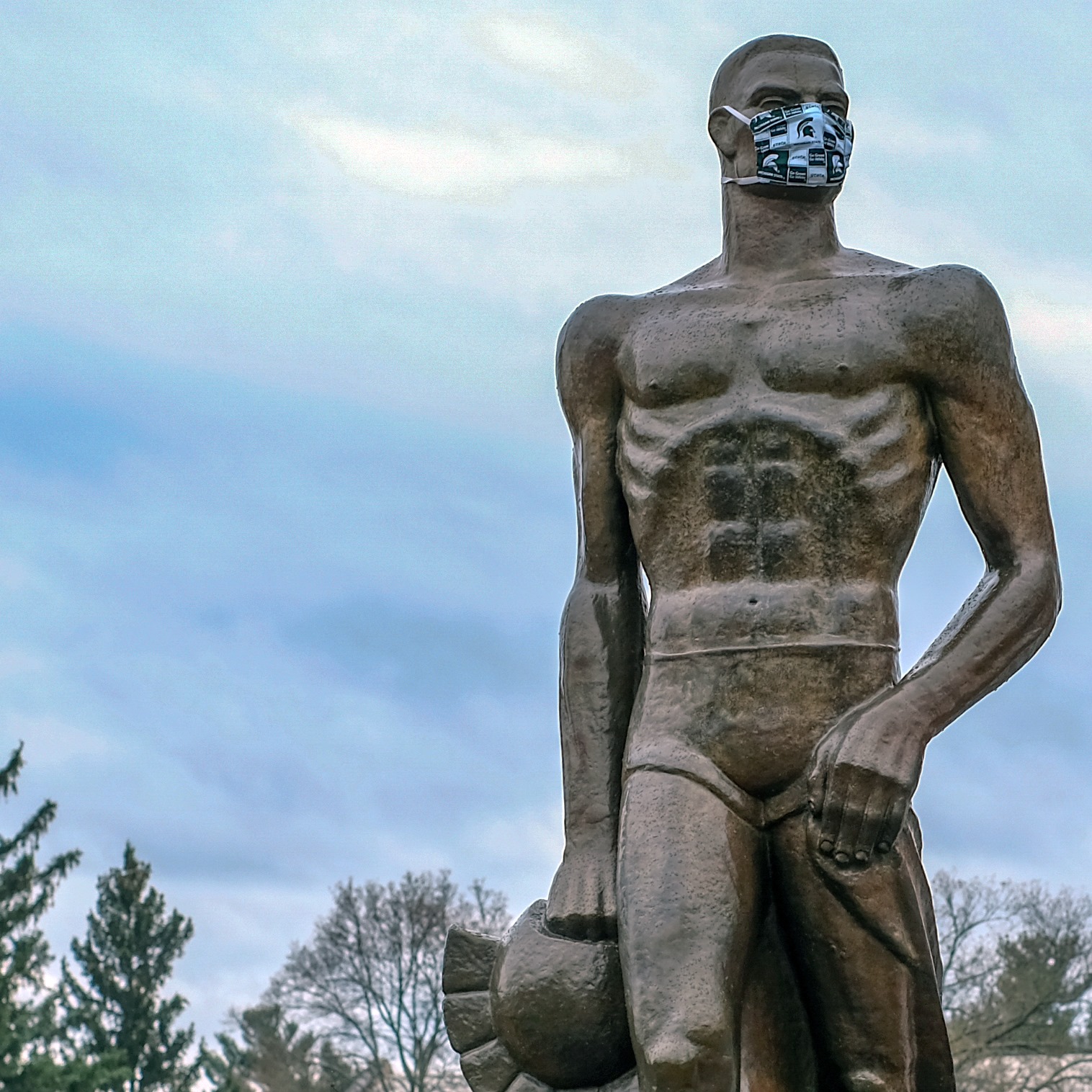 Today, hundreds of Spartans are receiving a text message telling them to spit. In a season rife with political messages and spam about extending your car’s warranty, being told it’s time to deposit your saliva in a capsule and drop it into a box could be considered a refreshing change of pace. And that’s just what happens when you sign up for MSU’s COVID-19 Early Detection Program.

“It gives me a good excuse to walk by the Red Cedar for a few minutes after I make my deposit,” said one staffer, who wished to remain anonymous, at a drop site. “And I’m glad to know I’m helping.”

Given the speed at which both medicine and regulatory bodies move, MSU’s groundbreaking program came together in an astonishingly short amount of time. Deconstructing the program, one can see an amazingly complex machine that almost didn’t happen.

The Seed of an Idea

Along with his fellow neuroscientists in the Department of Translational Neuroscience at MSU, Jack Lipton. Who chairs the department, followed emerging science around COVID detection. Reading a preprint (a scientific paper that precedes formal peer review), Lipton saw an article about something called “digital droplet PCR” in reference to COVID-19.

As part of their research into neurodegenerative diseases, Lipton and his colleagues use digital droplet PCR (polymerase chain reaction) technology. As they read the preprints, an idea presented itself.

“We were just looking at it as enthusiasts for science,” says Lipton. “We said, ‘We could probably get a test like that up and running in a week.”

Lipton and his team, which includes Joseph Patterson, PhD, Caryl E. Sortwell, PhD., and Irving E. Vega, PhD, set about doing just that. They planned to use the digital droplet PCR to screen faculty and staff in the Grand Rapids research center where they work.

It soon became apparent that what they were doing could have much larger implications for tracking the spread of COVID-19.

As Lipton’s team made strides with the PCR test, the Office of the Executive Vice President for Health Services asked Lipton to join the campus reopening task force, and, along with Dean Birgit Puschner of the College of Veterinary Medicine, operationalize the new test. But the team soon encountered regulatory challenges.

“We soon found out that the kinds of things we were doing, even as we developed the test, couldn’t get validated by the FDA if we weren’t a clinical lab. We started to realize there were a lot of regulatory challenges,” says Lipton.

“We had to go the human study route, because we couldn’t use our test in any kind of clinical way. We developed a couple tests, one out in the community, and one testing MSU faculty and staff. We were comparing the PCR test being used by the CDC and comparing it to our digital droplet system.”

An Array of Obstacles

As the team worked to navigate legal and regulatory issues around obtaining hundreds of saliva samples per week, they were fighting battles on the scientific and supply chain fronts as well.

If the Early Detection Program was to be effective, it would have to increase capacity drastically. To do this, they would pool samples and test, for instance, a dozen samples at a time. But they needed a way to follow up on a pool containing a positive test that was more efficient than contacting all saliva donors in that pool or storing isolated samples of each. Not to mention that the amount of human labor involved in so much testing would stretch the team beyond capacity.

Enter “array pooling,” a sort of process-of-elimination mathematical arrangement of samples where each donor is unique to two pools.

“There are a lot of papers on it, but not a lot of people doing it,” says Lipton. “If people are unique to two pools and those two pools light up as positive, we can figure out which individual is positive.”

The team ran some trials, and were able to identify a known COVID-19-positive sample among 500 specimens. And the list of collaborators grew. “To pilot this, we pooled students from the College of Human Medicine and the College of Veterinary Medicine. We got a lot of spit,” say Lipton.

Another crucial problem was that many members of the team were volunteers, and the Early Detection Program required long hours to address its myriad moving parts. The solution for this problem turned out to be simple: working eighteen-hour days, in Lipton’s case, from what he affectionately calls “Command Central”: his living room. On any given day, Lipton can be found eating microwave ravioli between phone calls, or updating the FAQs that evolve as the program does.

“Many of which are with saliva donors who have questions.  I’m trying to maintain a personal relationship with participants. I’m trying to tell them, “This is all brand new. Bear with us.’”

Keeping It Simple, or At Least Relatively Simple

Other universities are trying different approaches—self swabs, reporting on symptoms through mobile apps—but Lipton’s team developed core principles to sidestep as many process hurdles as possible. The saliva kit skirted many issues -- it doesn’t require people on-site to administer the test, which is less costly and safer.

Says Lipton, “The pitch is: keep it simple. Utilize people, not machines, and make sure it’s not too expensive.” Keeping people employed who may have otherwise not been doing lab work was also a consideration for Lipton.

Lipton’s team worked with the School of Packaging to develop the efficient, safe, cost-effective packaging for the kit itself—Assistant Dean Laura Bix developed the original prototype of the saliva kit. They also worked with MSU communicators to make sure they conveyed the clear instructions on the kit itself.

The Early Detection Program performs more than the obvious function of letting people without symptoms know that they are carrying the virus. It also informs researchers about what kinds of behaviors are driving the spread. Saliva donors fill out a short survey when they make their donation, and this allows scientists to create a portrait of the highest-risk behaviors. (They come as no surprise—wearing a mask, staying physically distant, washing hands, and avoiding crowds are our best weapons in the fight against the novel coronavirus).

By collaborating with the Department of Epidemiology and Biostatistics, the Early Detection Program can perform crucial analysis of the data the program is collecting, as well as provide guidance on testing parameters regarding proximity to campus and testing frequency.

“The Department of Epidemiology and Biostatistics has continued to work with the COVID-19 Early Detection Program, trying to optimize testing strategies to protect people at MSU and the surrounding community,” says Claudia Holzman, a professor of epidemiology who collaborates with Lipton’s team. “Our goal is to provide data-driven insights that can guide decision makers. We do this by staying current with the evolving epidemiology of COVID-19 and by enlisting the tools of infectious disease modeling.”

As with so many things during the COVID era, a monumental challenge proved that when innovation, collaboration, and adaptability are called for, Spartans will rise to the occasion.