Undergrad is Saving Lives in a Dark Season: Spotlight on Cadet Colin Woods 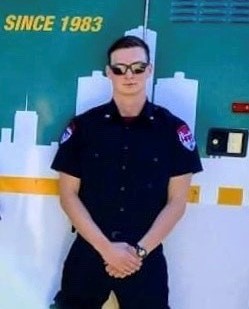 What would be grueling, harrowing work for most people is the ideal job for the soon-to-be-sophomore, who is on a pre-nursing track at MSU.

The satisfying click as life jacket buckles snap snugly into place at a canoe rental. The rhythmic chirp of the grocery checkout lane. The grumbling of a shredder as it eats stacks of old paper. These are the classic sounds of summer student employment.

For Cadet Colin Woods, that soundscape is different. Long stretches of silence as Detroit sleeps, the odd whoosh of a car passing. All at once, the radio comes to life, and the tinny voice is pushing Woods and his partner into an unknown filled with the highest of stakes. Then the sounds change: the telltale call of the siren, voices pitched in panic, Woods and his partner speaking calmly and quickly. The sound of air forced into unwilling lungs by a machine. Sometimes by Woods himself.

Woods isn’t working a typical “summer job.” He is working 12 and sometimes 24-hour shifts as an EMT in Detroit. What would be grueling, harrowing work for most people is the ideal job for the soon-to-be-sophomore, who is on a pre-nursing track at MSU.

“I’ve had cardiac arrests, I’ve had drug overdoses, I’ve had gunshots, I’ve had motor vehicle rollovers, motorcycle accidents,” says Woods. “The other day, I got called for a guy that got hit by a car, and when we got there, it ended up being a dog that was shot. We have everything under the sun. That’s just the medical services in general. You never know what you’re walking into.”

Woods credits much of his confidence and ability to remain calm and disciplined to his involvement with AFROTC, or Air Force Reserve Officers Training Core. “The whole program is based around leadership, and that’s exactly what they do. They’ve done worlds of stuff for me and helped me prepare for my career in the Air Force, and even everyday life. I can’t say enough good things about the ROTC program,” he says. Training and learning in the time-honored military leadership program is another component of Woods’s future plans.

“I got interested in a career in the Air Force called Combat Rescue Officer,” says Woods. “Special operations combat medic search and rescue is what they do. When someone gets shot in the middle of a firefight, they go in in a helicopter and get them. They can do mountain rescue, water rescue, they’ve been trained everywhere. That piqued my interest in tactical emergency medicine kind of stuff.”

What does the family of someone like Woods think when their son is on track to visit every imaginable climate for the purpose of choppering into gunfights? Concern, certainly, but also a sense of pride and legacy.

“My parents love to tell me I think I’m invincible because I’m 20,” says Woods. But he credits his father, who is a Detroit police officer, with imparting upon him a healthy relationship to risk and duty — and also with planting the seeds of his dream. Woods’s father was facilitating a tactical medicine program for the Detroit police, and he encouraged then 13-year-old Woods to sit in.

“I was sitting there with a bunch of DPD guys and we’re all putting tourniquets on each other. That’s when I knew this was really cool stuff, and I really wanted to do this,” says Woods. He became a lifeguard in high school and proceeded to get EMT certification — a laborious process requiring multiple practical and written tests — the summer before coming to MSU. He never dreamed he would be ushered into daily medical service in the demanding capacity he is now.

“I wasn’t working, per se, when the regular school year was going on,” says Woods. “But once all this stuff started with COVID-19, I figured I had a little bit of time and I should probably go in and try to do what I can.” This “little bit of extra time” turned into 70+ hour work weeks. Woods knew he had to help. But he is quick to identify his sense of duty as anything exceptional within the larger medical services community. “Everybody in the first responder and EMS community is having to step up right now. It’s not just certain people.”

Woods, who is on an Air Force scholarship and has made the dean’s list both of his semesters at MSU, has been juggling academics, work, career planning, and little sleep. He’s even been quarantined after exposure to COVID-19, though he is healthy. But through all this, the greatest challenge the young Cadet faces is the emotional toll of the work he loves.

“My first CPR was difficult. Not in the sense that I didn’t know what I was doing. I snapped into all that training we got and went straight to work,” says Woods. “But sadly, the guy didn’t make it, and his daughter was actually with us. For me, that’s the hardest stuff. It’s not seeing the really gruesome stuff. I’ve never been squeamish around that. But I’m very empathetic around my patients. It’s really hard to see them and their loved ones go through something like that.

“Being empathetic for your patients, that’s always what you want to be. You want to have their best interests in mind. That’s your whole job. We just have to accept that we did the best that we can and hope that they’re in a better place now.”

Despite the emotional impact the job can have, the satisfaction and challenge of it have made Woods feel more certain about his chosen career. While the pandemic has weighed heavily on him, like everyone, Woods has found a way to use this dark season to jumpstart his future. He is eager to resume his education in the fall.