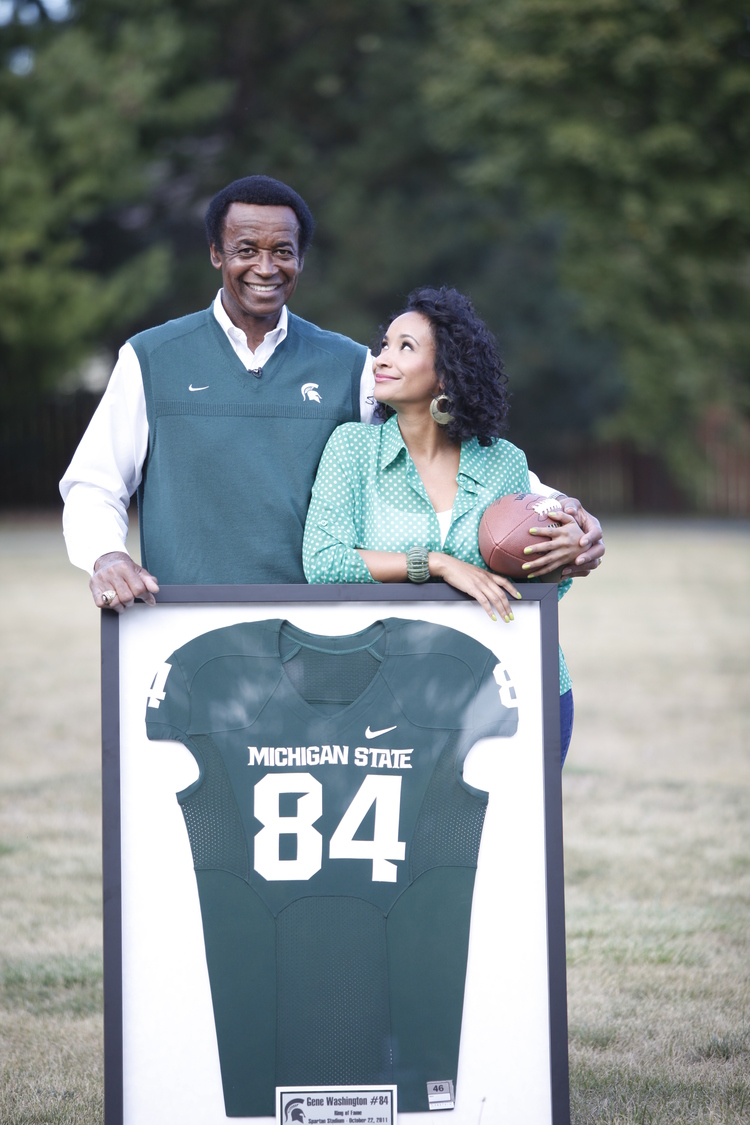 Gene Washington, Football Hall of Fame inductee and former Vikings wide receiver returned to his alma mater on September 26th, 2018, for the screening of a documentary about his 50-year career.

Gene Washington, Football Hall of Fame inductee and former Vikings wide receiver returned to his alma mater on September 26th, 2018, for the screening of a documentary about his 50-year career. Prior to being drafted into the NFL, Washington, an African American, played for the first fully integrated college football team in the nation: the Michigan State University Spartans. While the documentary is largely centered around Washington and his football career, his teammates Bubba Smith, Clinton Jones and George Webster are also featured as they, along with Washington, made history as first-round picks in the 1967 NFL draft.

The documentary, Through the Banks of the Red Cedar, was directed, written, produced, and narrated by Washington’s youngest daughter, Maya. She called the work a “labor of love” involving seven years of interviews with her father’s relatives, friends, teammates, current MSU athletes, and others, in her quest to understand the legacy of her father and its lasting impact to this day.

Despite his upbringing in the segregated South in the 1950’s, Gene Washington saw a different value in his Spartan student colleagues and teammates: kindness. He said, “That’s what Michigan State is about – being nice to people. Are you being nice today?”

Maya Washington was inspired by her father’s life, so much so, that she wanted this documentary to inspire other individuals. “Hopefully it inspires people to continue that legacy moving forward,” Washington said.  “To be top scholars, to be elite athletes performing at the highest level, but also leaders for equality and justice for all students.”

After the screening, there was a panel discussion with Maya Washington, Gene Washington, his former teammates, and current MSU athletes. Members of the audience asked further questions about inclusion, sports culture and panelists’ experiences at MSU. We asked for audience perspectives on Washington and the documentary.

“I think it’s very important for leaders like Gene Washington to come back to campus and speak on the progression of sports in [the areas of] diversity and inclusion,” said sophomore Miyanna Fowlkes, chief diversity and inclusion officer for the Residence Halls Association. “It allows younger leaders like myself to put a face with the movements we have heard stories about and gain knowledge on how to move forward more effectively here at MSU.”

“I think this is a part of our history. MSU has always been a place where people come to be included and to learn and to grow,” said Allan Haller, senior associate director and chief of staff for MSU Athletics. “MSU is about the people and everything that this group did allowed me to be a student athlete and allowed me to do what I do today.”
Gene Washington, who holds both his Bachelor’s and Master’s degrees from MSU, believes that his education was the most important part of his experience at MSU. “I was able to get my degree in four years,” Washington said. “The most important part to me, is the education.”
For more information on the documentary, visit http://www.throughthebanksoftheredcedar.com.