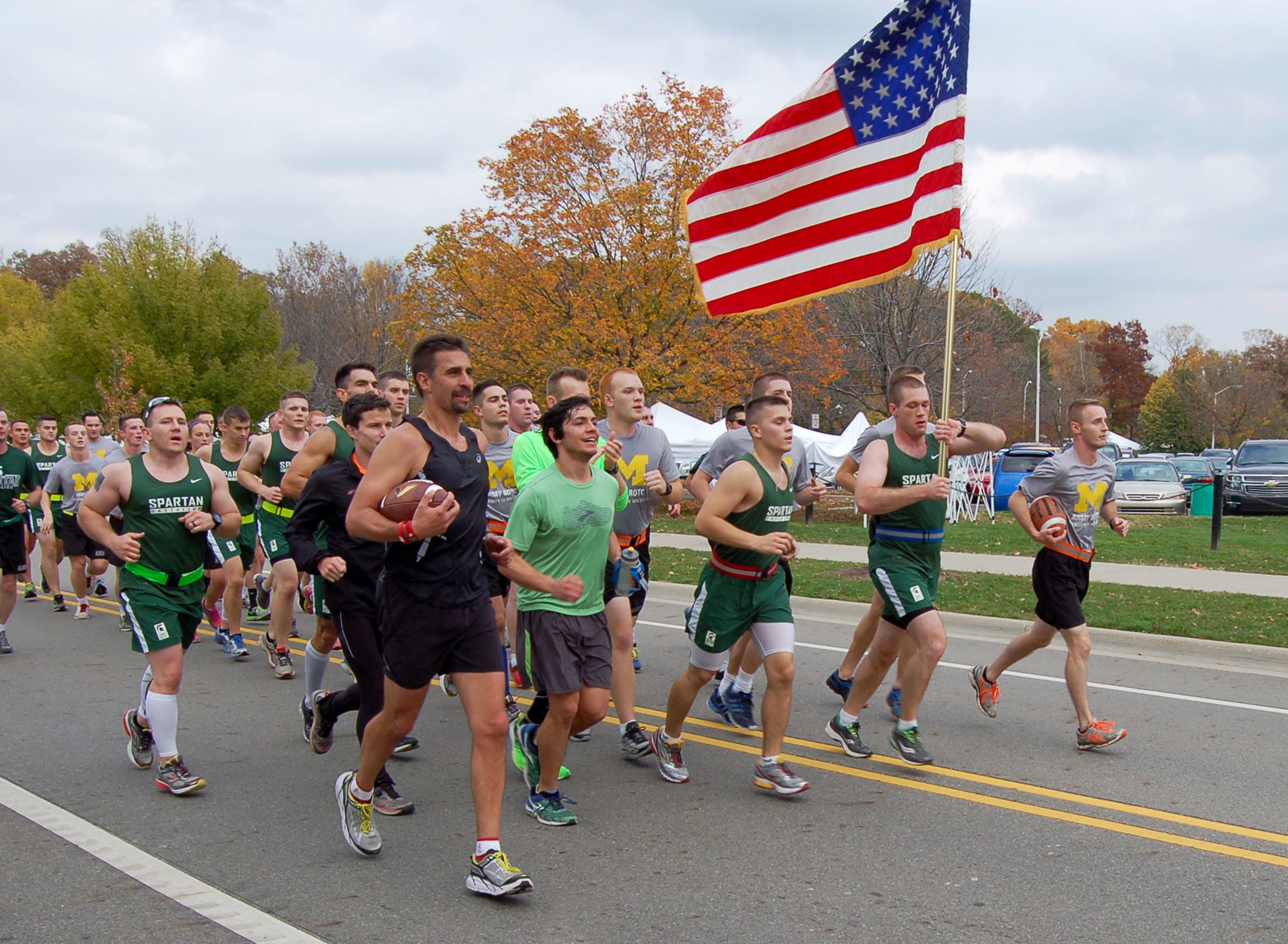 For the fourth consecutive year, a team of ROTC cadets from the Spartan Battalion and the Wolverine Battalion will come together to participate in Alex’s Great State Race.

In what continues to be an increasingly contentious political environment, where rivals refuse to work with one another, it is heartening to see Spartans and Wolverines working together to see which university can raise the most funds and awareness for student disability services.

For the fourth consecutive year, a team of ROTC cadets from the Spartan Battalion and the Wolverine Battalion will come together on the day before the MSU versus U-M football game – Friday, October 6 – to participate in Alex’s Great State Race.  The race is a 64-mile run from the “Sparty” statue on MSU’s campus in East Lansing to “The Diag” on the University of Michigan’s campus in Ann Arbor, in which the game ball for each school is carried from one campus to the other.

This year, the ROTC cadets will run the last five miles of the race with Lieutenant Governor Brian Calley and Michigan Supreme Court Justice Richard Bernstein.  Calley and Bernstein work together on the MI Hidden Talent Initiative to increase opportunities for competitive employment for Michigan residents with disabilities.  Calley and Bernstein will accept the game balls from the ROTC cadets at a ceremony immediately following the conclusion of the race.

The event is an effort to raise awareness and funds for MSU’s Resource Center for Persons with Disabilities and U-M’s Services for Students with Disabilities in memory of MSU student Alex Powell, who died May 8, 2011, from cancer.

As Powell contemplated his acceptance to MSU, a lifelong dream of his, he received the devastating news that he had a rare, aggressive form of cancer.  During his freshman year at MSU, the disease began to take its toll, so he turned to MSU’s Resource Center for Persons with Disabilities for assistance.  The center helped Powell develop accommodation strategies and to communicate his needs to each of his professors.  Powell also established a connection to the University of Michigan during this difficult time, as he received cancer treatments there.  The positive experience they had with both institutions is what spurred Powell’s parents, Juliana and Steve Powell, to create this annual tradition.

“Creating Alex’s Great State Race has helped me heal after Alex’s death, while at the same time honoring his memory in a way that I believe he would be proud of,” Juliana Powell, said.  “Life-changing events occur when we least expect them.  We were very fortunate to find the right resources through MSU and the University of Michigan to help Alex achieve his goals and dreams while he fought cancer.  We received outstanding care and support from both universities.  This event is designed to create awareness and funds that will help both universities continue their tradition of excellence in student disability services.”

Spartan and Wolverine fans are encouraged to welcome runners at “The Diag” on U-M’s campus in Ann Arbor at 12:00 p.m. on October 6 as well as donate through the “Alex’s Great State Race” website where they can choose the center to which they would like to donate.