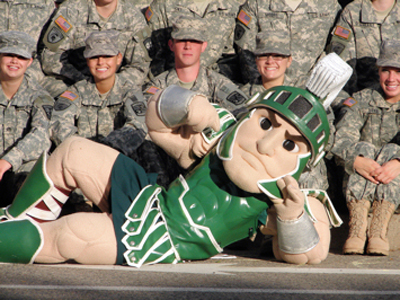 The Department of Military Science at Michigan Agricultural College was founded during the school year 1884-1885 with the assignment of the first active duty Army officer as the professor of military science and tactics.

The Department of Military Science was founded during the school year 1884-1885, when Michigan State University was known as Michigan Agricultural College, with the assignment of the first active duty Army officer as the professor of military science and tactics. Although military training had been present on campus before, there had been no structured program with government sanction until the assignment of a young infantry officer, Lieutenant John A. Lockwood, in the fall of 1884.

The Department of Military Science has undergone many generations of change and its history reflects the political, social, and economic realities of the times. Graduates of the program form a core of distinguished and successful alumni of the university in both the civilian and military community. This includes seven general officers, and more recently, State Senator William Sederburg, class of 1973. The traditions of the department and the mission of the Michigan State University Reserve Officers' Training Corps are best expressed in the Spartan Battalion motto, "Training to Lead".

I find most discussions about our collective exhaustion to be themselves terribly exhausting. But "The Burnout Epidemic" surprised me.